How do you control playback of an FLV in Captivate so it is controlled by the main playbar navigation or your own pause / play button?

I have seen this question many times but hadn’t really taken the time to look into it since I never had that need in my courses – until today that is.

Basically what I needed to do was to add a custom play / pause button created in Adobe Flash to a Adobe Captivate project. The project use navigation built from various buttons as opposed to projects using the standard playbar. The problem was that when you paused the slide then the FLV video on that particular slide continued to play. First I thought it was because the project used a custom navigation so I switched on the playbar but the problem remained.

In the Options tab of your Flash Video in Captivate set the Display for property to duration of video. Also select Synchronize with project.

You probably also want to set it to Autoplay and remove the skin in the Flash Video tab.

On you slide you need to extend the slide timeline to the same duration as your video.

This will allow you to pause / resume the FLV video using the standard playbar or a custom button.

Please note that this is probably only a viable solution if your FLV movies are relatively short. I wouldn’t use this for videos longer than a couple of minutes since you would probably encounter some performance issues. 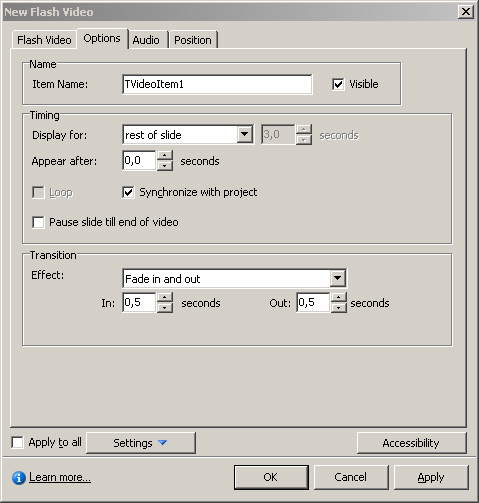